Are Double Buggies Ideal for Runners?

It doesn’t matter whether you are a parent of a toddler with another little one on the way, or you’re a parent who’s expecting multiple little ones to arrive at the same time, double buggies are a wonderful invention.

Many new parents utilize a buggy as a way to get out of the house, usually for some exercise. If finding time to keep fit before baby or babies arrived was difficult, parents struggle even more with literally little to no time in their day that isn’t spent taking care of their little ones. 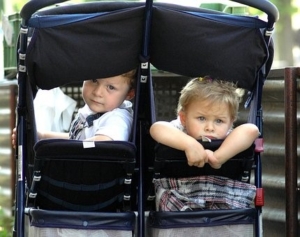 Thus, the buggy. Running and walking with the baby in the buggy is a highly recommended form of exercise and is doubly so with multiple kids. Time outdoors in the fresh air does everyone some good, whether it’s two very new additions to the family, or a squirmy toddler and new babe.

Runners have numerous benefits to using a double buggy, whether or not they’ve previously been using a single buggy. However, it is important for those interested in running to choose a double buggy conducive for that form of exercise.

Choosing the Right Kind of Buggy

When you’re both a mom and a runner, there are two types of double buggies to choose from. Double buggies are a must have if there’s more than one baby to transport around and make running with the kids possible.

Double buggies are ideal for runners, but of the two styles available, one may be better suited. Primarily, this depends on the age of the kids that are going running with you. The tandem style will allow for the kids to sit one in front of the other, while the side-by-side allows the kids to sit next to each other.

The benefits to a side by side buggy are numerous. It puts both kids at the same level and provides the same view, which can be helpful to keep two older babies entertained by watching the landscape whiz past on the run.

With a side-by-side, the weight of the kids is more evenly distributed, which can help if your run involves curbs, uneven terrain, or inclines. Storage wise, a side by side will have more room, especially underneath, to store running essentials like water and post or pre-run snacks for the tots and parent alike.

However, one of the few but most notable downsides to a side by side, especially for a runner, is its width. Perfect for storage and ample room for everybody, a side by side will also take up the most room on the sidewalk or trail. This can make turning corners or sharing the road much more difficult.

In contrast, the tandem style buggy will be slim enough to make sharing the path easier with fellow runners, and probably allow for a faster run as well. Corner turning is far more comfortable in a tandem, as its limited storage space means less to move around.

Tandem styles are perfect for runners who have especially young babies, as seat positioning won’t be an issue, and it can be easier to transport a younger baby who isn’t holding their head up and sitting up yet. They are also perfect for a compact running solution.

The length of tandems can be a bit troublesome, however. They aren’t as bulky width wise like a side by side, but they will be a bit longer, which can make them awkward to move up and down curbs or on running terrain that has too sharp of turns – there will be an increased risk of the buggy tilting over, which will require the parent to slow and be more cautious when taking sharp turns especially.

Safety wise, both double buggy styles are comparable when running with the kids. With younger babies, a tandem style could allow for easier and safer docking for the littlest one in their cars eat, while a double buggy may not have docking features and is probably best suited to runners with older babies.

Both styles will often feature secure safety harnesses to help keep everyone strapped in.

Is a Double Buggy Ideal if You’re a Runner?

The simple answer to this is yes. Double buggies are the perfect way to keep enjoying running, no matter the age of the kids.

What makes them ideal are the different styles available. Running with the kids is an activity that is very beneficial to all involved, but there is an adjustment from running with a single buggy. Whether you’re a runner, who’s expecting a double arrival or a runner who is expecting an addition to the running group, finding the right style of double buggy can help ensure that your running days don’t have to stop.

Got a question or an opinion for this article? Share it with us! Cancel reply